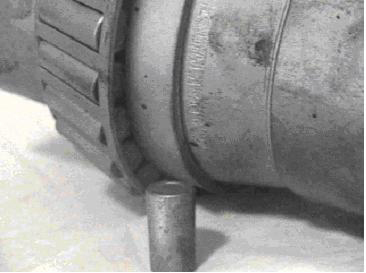 The following data was collected on the jackshaft of a jaw crusher at a local limestone quarry.  In December, a sharp increase in vibration and noise levels was noted at the opposite drive end pillowblock bearing.  Levels continued to increase through January until the bearing was replaced in early February.  The bearing was cleaned and disassembled for inspection.  Considerable pitting was found around the entire inner race with corresponding damage to the rolling elements.  The upper plot is the post repair data. 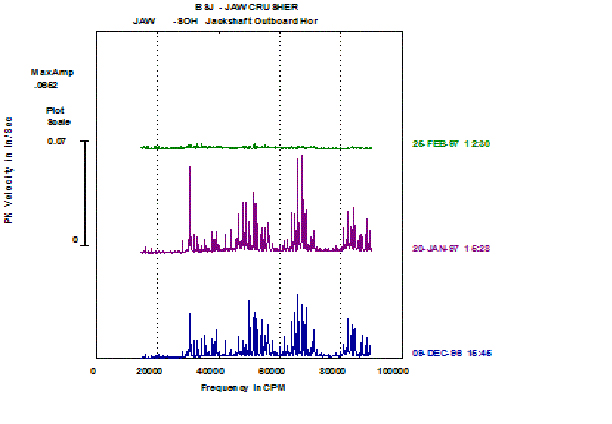 On this fan CPM was asked to “do your best to get us to the weekend” as a replacement was on order. These repairs were performed between shifts (from 1am to 4am). The following data was collected on the opposite drive end fan bearing. On initial startup, the vibration levels at this fan were extremely high (>50 Mils) so problems other that pure unbalance were suspected. A strobe inspection revealed several broken welds on the fan pedestal. Once these welds were repaired vibration levels were more tolerable (~15 Mils) but still too high. At this point a dynamic balance was conducted and vibration levels dropped to ~2 Mils. The fan was then returned to service and continues to operate to this day. 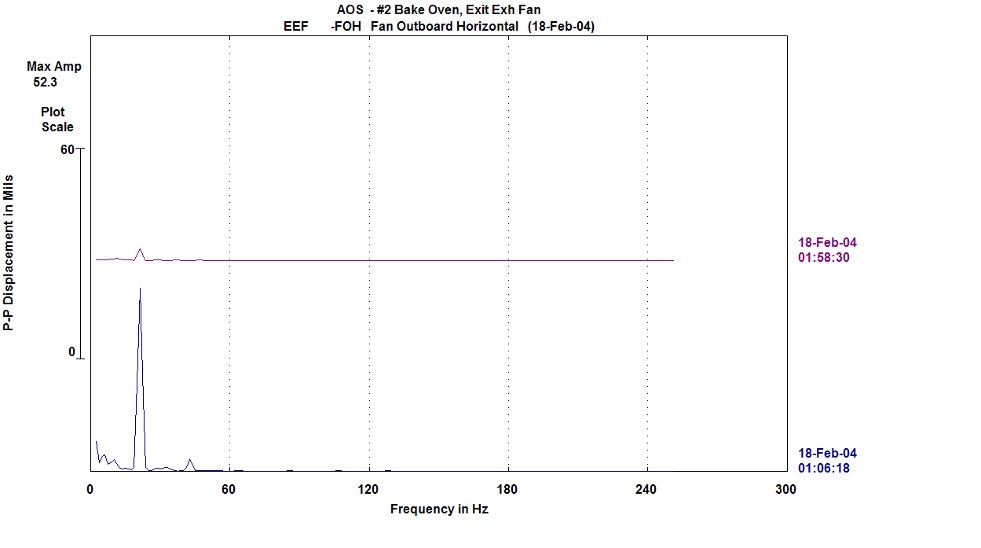 Following is a report of the conditions noted on the above bearing after replacement based on findings from the vibration analysis program.

Unit was taken out of service two days after vibration readings indicated a potential problem. The bearings were cut in half for visual inspection. Following are the pictures and notes of the “AS FOUND CONDITIONS”

BALLS AND CAGE     This area showed MODERATE CONTAMINATION buildup of dirt and contaminants.

Vibration and resonance testing has been performed on this newly installed motor, reducer and pump.

Data was collected in 8.5% increments from 15-100% of operating speed and compared to Hydraulic Institute/ISO 10816 vibration standards.  Newly installed coupled machines between 20 and 400HP must remain below 0.09 in/sec at all operating speeds in all directions (X, Y, Z).

Resonance testing was conducted in both the X and Y directions at each component and the base.

Motor vibration exceeded allowable limits at 40% due to resonance excitation.  This speed corresponds to a supply frequency of ~34Hz. Recommend setting a skip frequency in the drive of 34 ±2Hz to prevent extended operation at this speed.

No other vibration problems were noted at the time of the survey. 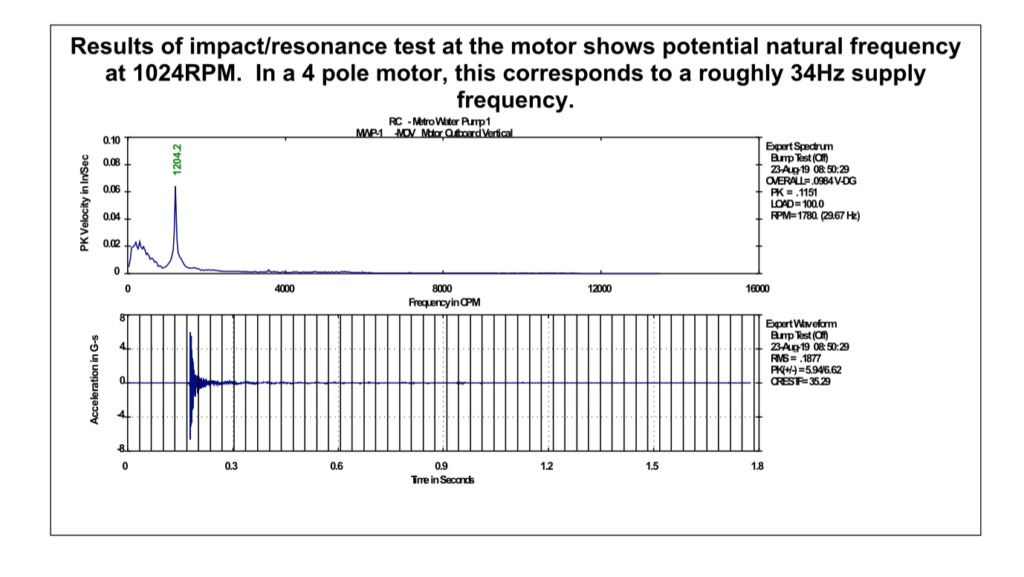 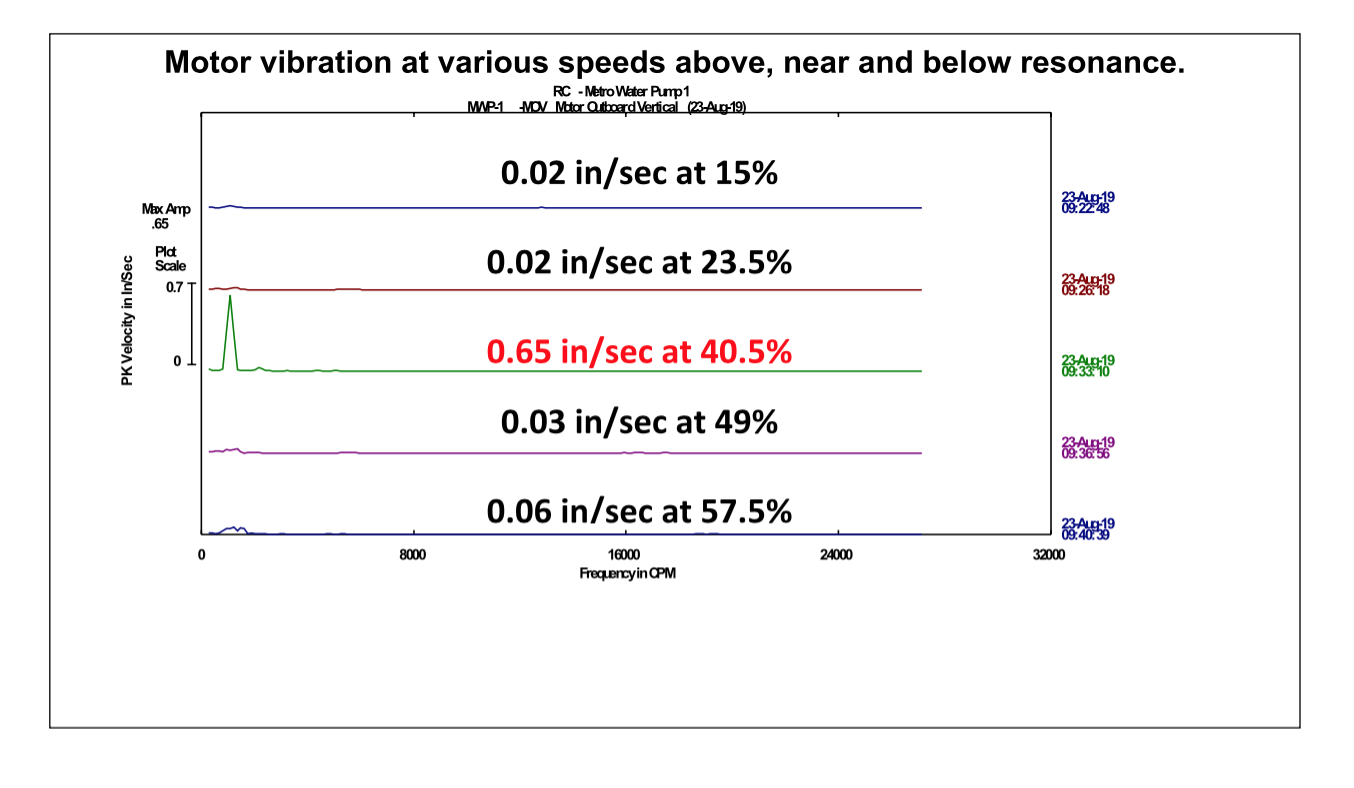 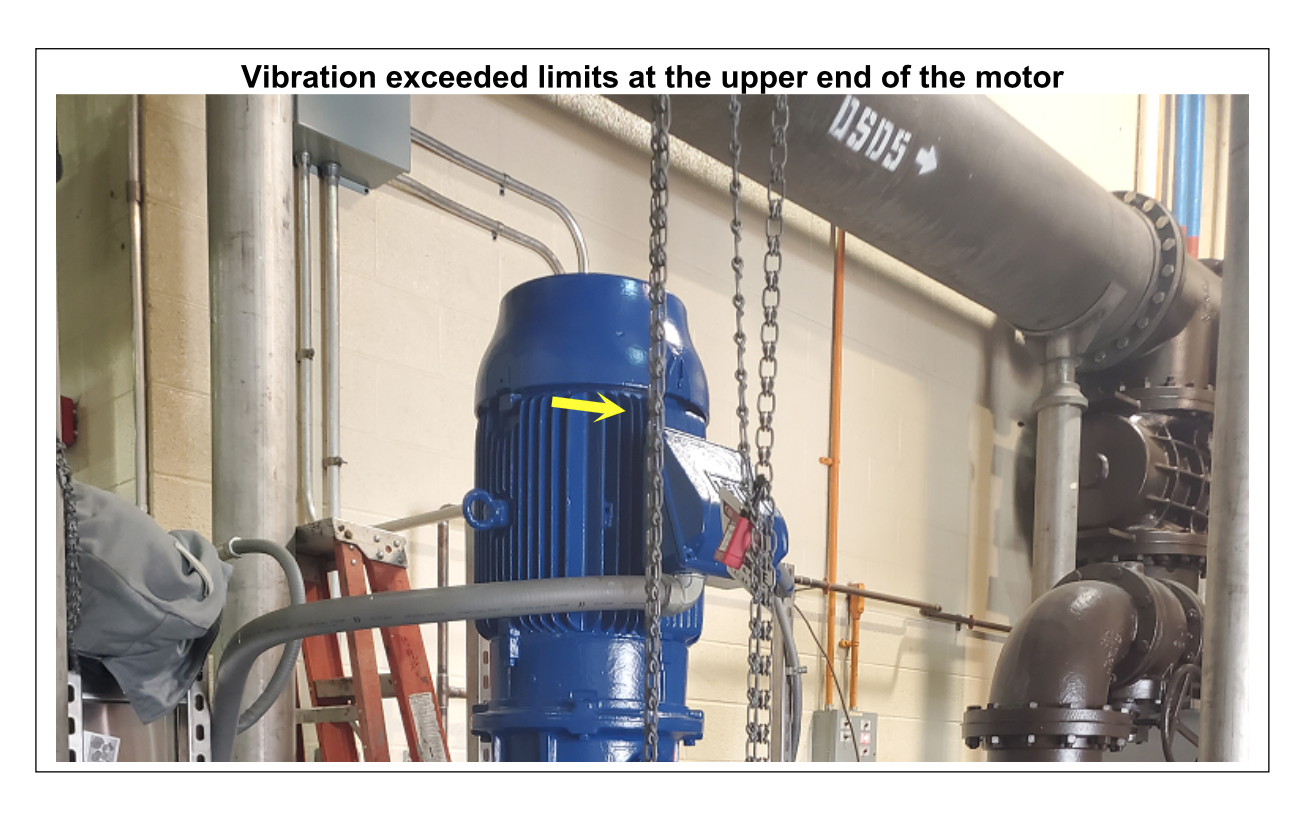 Data taken on a regular periodic route showed a sharp increase in levels at the drive end fan bearing. Visual inspection found a considerable amount of what appeared to be fresh shavings in the area of the bearing. A strobe inspection revealed that the shaft was turning in the bearing and shaft movement within the bearing bore. After shutdown, missing set screws were noted and the shaft had a new 1/16” notch cut into the bearing journal. The upper plot shows the post repair data. Below is a trend of overall levels showing data over the last three years. 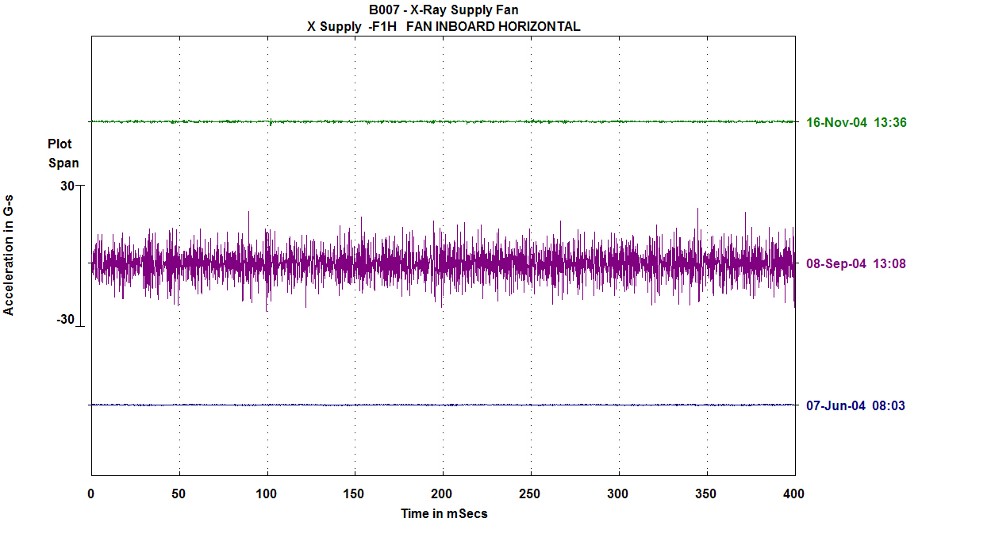